2.00 am, April 15th, 1912. Captain Edward J. Smith stands on the bridge of The Titanic and watches in silent despair as the freezing waters consume 269 metres of unsinkable engineering ingenuity. In the grand maritime tradition he wordlessly goes down with his ship. That may very well be how many of us are feeling after the results of the General Election, the worst of all worlds, no matter which side of the aisle you choose to park yourself on. What it means for education, grammar schools, the funding formula we will have to wait and see. What it means for the life chances and ambitions for our students is also unclear at this vantage point. However, regardless of which direction the vicissitudes of democracy blow us next, it further serves to highlight the importance of personal accountability. Now more than ever each and everyone of you, owe it to yourselves to do whatever you can to give yourself the greatest chance of success regardless of what kind of future we might be facing.

So with that, I bring to your attention a fascinating new book called Face Value – The Irresistible Influence of First Impressions by Alexander Todorov. I’ve written quite a lot about this in my book and indeed cited some findings from the man himself – as Professor of psychology at Princeton, he’s a chap who should be taken seriously. Pareidolia  – the phenomenon of seeing faces in everyday objects, mops, the backs of cars, ovens, clocks and so on. We’ve all done it – what you probably didn’t understand as you were doing it is that you are hard-wired to do so. Apparently faces are the central preoccupation of humans – it is how we are programmed to access and understand unfamiliar situations and assess the level of threat, compatibility, desire, interest and trust. Todorov famously showed people pictures of two politicians for as little as a 30th of a second and asking which was more competent and in around three quarters of the results those people were able to correctly predict election results. Like it or not, looks matter.

Why is this relevant to you? Well obviously in the light of the last election it’s kind of interesting but more directly why is it of interest in regards to careers? Simply put, first impressions count. Obviously your face is your face and barring surgery there is little you can do to change it’s general formation – that said there is plenty you can do about making sure you look your best. The number of students who attend interviews, work experience and so on sporting an unwashed mop of hair that obscures half the face, patchy facial hair, excessive make up, the fug of cigarette smoke or any number of other opportunity crushing tropes is frighteningly high. 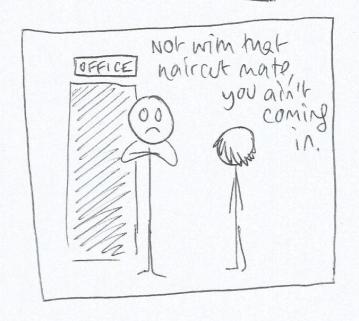 I’ve written about this on the blog before as well in https://edducan.blog/2017/05/15/top-5-tips-for-interview-attire-suit-up-or-why-quirky-is-not-the-new-black/https://edducan.blog/2017/05/15/top-5-tips-for-interview-attire-suit-up-or-why-quirky-is-not-the-new-black/ but if you needed a timely reminder and further proof then this remains as vital a time as ever to provide it. As unfair or as arbitrary as it may seem, this stuff really matters and you can either accept and embrace it or lose out to those that are prepared to. If it makes you feel any better, the godfather of logic, rationality and science Charles Darwin nearly didn’t make the cut to get aboard the Beagle after the Captain took against his nose and noted that he did not have ‘sufficient energy and determination for the voyage’. The theory of evolution was nearly undone by the shape of a guy’s nose, so as you’re tying back your hair, having a shave, whatever it might be, be ever mindful that you are in the very best of company.